Many people from The Brecks have risen to national and international recognition. Here are just a chosen few who deserve a mention: 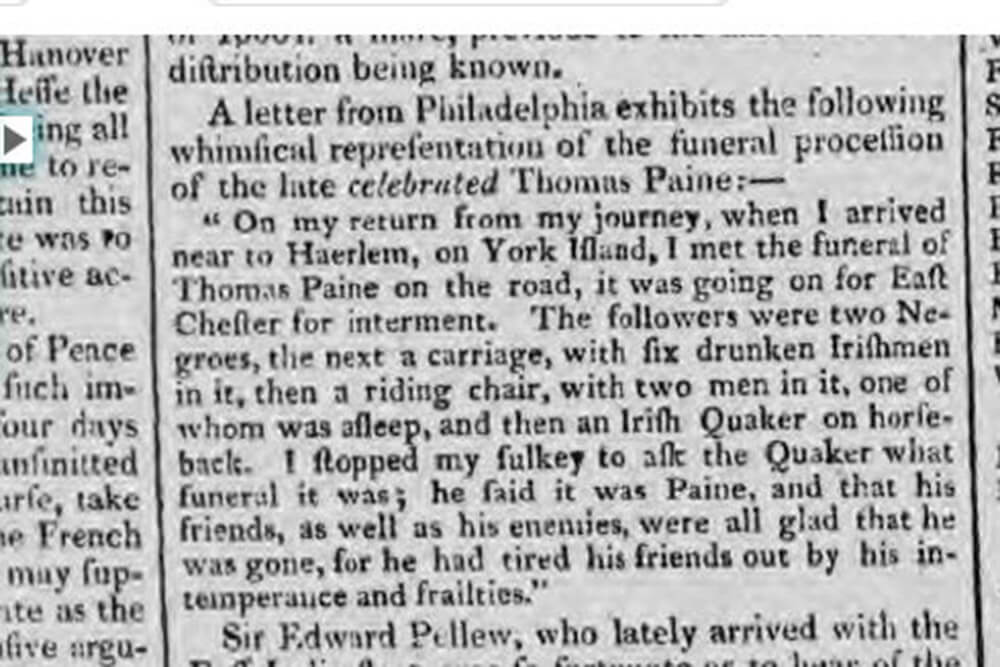 Thomas Paine was born in Thetford on 29th January 1737. Although his early education is said to have been pretty basic, it was obviously sufficient to make him want to learn more.

His father, Joseph, was in business and could write, as can be seen from his signature on his marriage license in 1734.

Thomas’ life was not entirely smooth and there are so many different stories about him. Without further research in the original documents, it is impossible to sort out the truth from the fiction!

Sufficient evidence is to be found, that he met Benjamin Franklin in England and was persuaded to go to America. This changed his life.

He became even more interested and vocal about politics and wrote many pamphlets and books extolling the virtues of common sense. One of his most famous pamphlets was actually called “Common Sense” and over 500,000 copies of that particular booklet were sold. That means that it was purchased by about one in five of the population of the country!

After his interest in the American Revolution, when the French Revolution started, he published works about that too. Becoming wanted in England for treason, he fled to France, where he also fell out of favour, being imprisoned for voting against the execution of Louis XVI.

Escaping execution more by luck than judgement, Paine is released from prison due to the work of the new American Minister to France, James Munroe, who was later to become the fifth president of the United States of America.

Thomas stayed in France until 1802, when he went back to America. There he remained until his death on the 8th of June 1809.

Even at the end of his life, Thomas was in the news:

He was laid to temporary rest at his farm in New Rochelle, near New York. That would usually be the end of the story, but, for Thomas Paine, it wasn’t.

A man, previously an enemy of Paine’s, called William Cobbett, had changed his opinion of the man and decided that being buried in a back garden was not really the fit place for such an important man.

Cobbett decided to transport Paine’s remains back to England and have him properly buried and suitably commemorated. He got the proper permissions and exhumed the coffin. The remains arrived on 21st of November 1819 and the whole situation caused quite a stir.

During the following years, Cobbett tried to raise money to bury Paine and provide him with a fitting memorial, all to no avail and. When he died, the remains were just left in a trunk.

The story of the bones, at times quite gory and unpleasant, appears to come to an end around 1844. They were supposedly given to a Benjamin Tilly, but, by 1854, several people claimed they had some, or all of the bones.

Sadly, there appears to be no definitive answer. They could be anywhere or nowhere!

Howard Carter was born in Kensington on the 9th of May 1874. But his parents were both from Swaffham and his father, Samuel, was an extremely talented artist.

Howard’s parents married in Swaffham on 2nd June 1858 and, by 1861, the family had moved to Chelsea, where Samuel exhibited and also worked for the Illustrated London News.

While in Norfolk, he spent time at nearby Didlington Hall, which was the home of the Amherst family. He would have been introduced to the family at an early age, because his father painted several paintings for the family. With Amherst’s interest in Egyptology, it is pretty obvious where the young Howard picked up that interest.

It was November 4th 1922 and Howard Carter was digging in the hot sands of Egypt. It was nearly the end of these explorations, as funding was being withdrawn, but the discovery of a step and then more steps, heralded some of the most exciting discoveries of the C20th. The tomb of Tutankhamen is well documented and needs no further description here, but, the man who made this amazing discovery was from this well-established Swaffham family.

George Henry Borrow was born on the 7th July 1803, at Etling Green near Dereham, the son of Thomas and Ann, nee Perfrement.

He spent the end of his life living with his step-daughter, Henrietta Mary, the wife of William MacOubrey. (MacOubrey appears to have been quite a character himself. Originally from Downpatrick, Ireland, he was trained both as an M. D. and also as a Barrister. He definitely deserves more investigation.)

Borrow’s books are often about travel, local people, their ways and personalities. Many see that they are autobiographical and the fact that Borrow did spend much time abroad, enjoyed extensive walks and was an accomplished linguist, all seem to uphold the supposition that his discussions with people in their own languages, would enable him to learn so much more about them as people.

He was educated at Queen Elizabeth’s School in Ipswich and travelled widely. He is best known for his exotic adventure novels, including King Solomon’s Mines, She, Allan Quatermain and several others.

Boudicca, The Queen of Iceni

Boudicca is the Celtic word for Victory. I can’t think of a more fitting name for

our most famous daughter. The Queen of the Iceni tribe of East Anglia was definitely not a woman to be messed with. She was tall and her long red hair added to her striking appearance.

Her husband was working with the Romans and, after his death, his lands were taken by the Romans, much to the disgust of his widow. The Roman Governor also decided to add insult to injury, by flogging Boudicca and having her daughters raped. Other Iceni chiefs were treated in a similar way and this led to a major revolt by the Iceni and the Trinobantes, with other tribes in support.

The Britons sacked Colchester and moved on to London and St Albans, where the Romans were defeated and retreated. The Roman army was reassembled near Nuneaton and, in AD61, the records show that 80,000 Britons; men, women and children, were killed. The Roman army is reported to have lost 400, with several hundred injured.

Boudicca wasn’t killed, but she took poison to avoid being captured.

This most famous of East Anglian women, is commemorated in bronze, just beside the Thames, beside the Houses of Parliament.